Hello? Is this thing on? 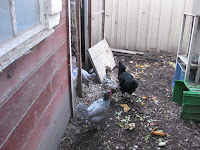 It's been like a year since I wrote anything. Blogger changed up their stuff so I couldn't host my blog on my own site via FTP any more. I've been procrastinating since then about updating it so it would work on their site but finally made the move.

I built a Hackintosh... a speedy PC that's running Mac OS X (2.8GHz i7 860 with 8GB of ram and cousin Joe's video card :) ). It's really cool although I think it's officially a hobby since it keeps taking up more of my time than I expected. It's fun to work on though.

Hey, more importantly. It's late. And I just killed a possum. With a pitchfork. Really. 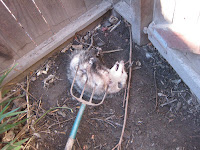 Sometimes it's weird around here.

I hear something outside, right now, and it seems possible the possum was playing possum (literally? Figuratively?). Although the last I left him there was a pitchfork stuck pretty far through him*. Enough that the pitchfork was sticking out into the air from the possum. I should have taken a picture. Anyway, tomorrow maybe I'll work a little on my McAfee project. Plus Jonah's got school off. Maybe he and I can remove the pitchfork and bury the possum. You know typical father/son bonding in San José. Just the usual stuff over here. Good times.

* I was pretty mad. He was scaring all our chickens and I think trying to eat them. Aww crap. I hear the pitchfork knocking on stuff. Most disturbing. I mean, do they have undead possums? Possums are really creepy already. But an undead possum would NOT be good. We have a kitty door too. He couldn't fit through with the pitchfork though.

You pitchforked a possum? That is kinda not boring. To see a truly boring site, check out http://thissiteisboringdontcomehere.com